The SLSA World Cup is rolling and it has been so for a while. This saturday it was time for Q2m races at Tradewinds. Liv was there as RD, and everything was set and ready. Lotsa skippers registered, and spectators were arriving too. Everyone anticipated a day of great sailing.
Me, I wasn't registered. No time for training these days. RL is keeping me busy, but I popped in to watch. Sadly, it turned out there would be nothing to watch. Even though the weather seems to be gorgeous on the picture above, the SL servers had decided otherwise.
Boats stopped moving. Certain areas of the course could not be entered. Skippers crashed again and again. I even crashed a couple of times, and I wasn't even sailing. After some fifty minutes of trying, RD Liv called for a crisis meeting in the lighthouse; The race was cancelled.

The air was thick with frustrations. Some blamed the Lindens, some blamed the boatbuilder. Some  blamed the landmasses in the area, and yet some blamed the wind system. Now, I dunno about the landmasses. It seems boats sail smoother, when there are less details to render on the horizon. However, SL allows us to adjust viewing distance, thus releaving the servers from the burden of rendering land.
Tradewinds YC does not seem to create massive lag, but sure enough... the minute the system has to render stuff on the horizon, the viewer slows down, and all those planes aren't helping. Not a big surprise really. The boat then. Is the boat causing these problems? Hardly. Usually the Q2m sails like a dream. Sometimes we see eleven boats racing just fine. Here's a video of eleven Q2ms at the starting line. 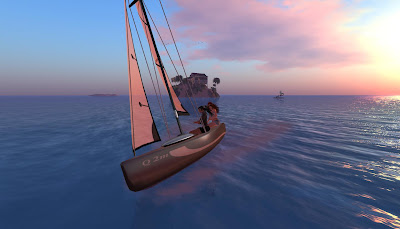 The Q2m use the wwc wind system. That system is also used by the Shelly Fizz, the Flying Fizz, the Bolero II and the Cotton Blossom II. Why? Because it has features for creating interesting races. Wind, windshifts, waves and currents are all part of an exciting race. SRYC run regular races with the Shelly, the Fizz and the Q2m. Usually they have more than 8 boats. No problems at all. We've seen numerous Flying Fizz races with 8+ boats elsewhere. Here's a Fizz race at Tradewinds.
The latest invention, the Q2.4mR comes with wwc too. Simply because it makes racing fun. The image  shown above is from a beautiful area in the North Sea, but the scenery definately causes lag. As soon as I reached open water, the sailing was smooth, so no... I don't see any substantial evidence that the wwc is the major cause of these problems.

Minutes after the cancellation I was out there in a Flying Fizz. No problems at all. Then I sailed the Q2m with Qyv. All was good. I also sailed the Baby Sloop out there. Again no probs. Finally I took a Demo Nemo (3) out there, and it kinda worked too, though the steering was slow and it sailed half submerged.
There are lots of myths about lag and what causes lag. I think I'll start looking for facts.