Here's a little something I wanted to do for a long time... First the "thing" itself: That famous Paul Elvstrøm Quote: "If in the process of winning, you have lost the respect of your competitors, you have won nothing", Paul Elvstrøm. There you have it Tillerman - That's what he said.

Now, I haven't actually heard Paul say precisely that, but he might very well have said something similar, when he visited us in opticlass. It's a goes back a few (many) handfull of years. Memory is one thing, but at the time I was probably too young to take notice while practicing my bowline knots.

Regardless, after racing a bit in SL - Yes there's racing going on, I felt like sticking it on the wall at Tradewinds YC.


It's rather unreal, but someone actually sent me a real life photo of the sign. It's on a wooden fence or wall. Presumably near the dinghy "parking area" in Nassau YC. (Yes, that Nassau; More civilized now). I cut it out - keeping the screws and all, and here's me fiddling with signs, screws and stuff at the red shack of my favourite virtual yacht Club: Tradewinds YC. 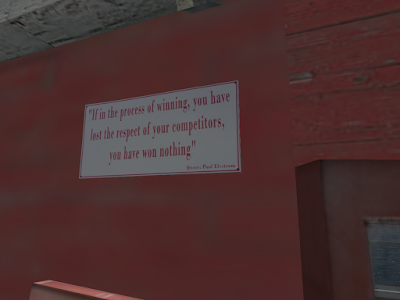 And here's the final result. That famous quote from Paul on the sign from Nassau Yachtclub is now a famous quote on the wall of the famous red shack at Tradewinds Yachtclub. Wooohooo. I like! U like?
Indsendt af Noodle kl. 14:51