Yesterday I was out sailing, minding my own business with a brand new and exciting update of the Bolero; More on that later. All was good until I received a call from Zim, my motorhead friend. He was heading up to Tradewinds YC in a huge tanker, and he wanted me to see it. So I did, and here it is...
Zim heading north, just out of the Blake Sea. The ship is heading N, so the Blake is SSE on the photo. It is a big ship. It actually looks taller than Spyglass, the island on the right side of the photo. And the space... The bridge is decorated like a living room. Office desk, charts all over the walls, millions of don't touch knobs and gizmos, kitchen, a big and comfy couch and what not.
Down below there are cabins decorated like luxury cruise cabins with huge beds, office desks, internet, art on the walls and a fabulous view over the ocean. Couldn't really take the time to photograph it. The waters are pretty shallow, and Zim didn't know he local waters very well. That's why my arm says go to port here.
Here we are again... crossing the raceline south of Tradewinds. And what's that above us? Looks like a genuine DC3. He didn't radio us, but later I discovered, I actually know the pilot. I sent him the picture. Now, Tradewinds YC is just around the corner, and look who's there...

It's "Little Liv", the commodore of TYC. Can u see the little dot with red hair? She looks kinda worried. Ok, we didn't hit the lighthouse, but we did run aground right off the lighthouse. Sat there for a while, while Zim tried to get us free. He finally succeeded, so anchor out. Ofcourse we invited Liv to have a look. She was still kinda shaky going "you guys remember to move this before u leave" again and again, hihi. 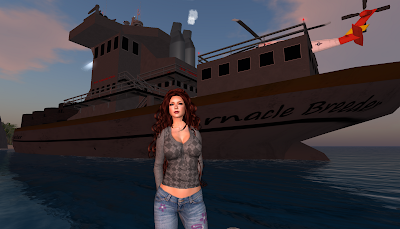 I can understand why. It is a huge ship. Lotsa noise, lotsa excaust, lotsa cpu power - to get a bit technical. It is probably the biggest functioning ship I've ever seen in SL. Had it been at the Working Boat Show, there would have been little space left for all the other boats. But you know what they say... The difference between boys and men? It's the price of their toys. Still with me guys? Did I leave u hanging long enough? Ok, so size does matter, but it isn't everything. It seems this boat was a bit too big for Tradewinds. When u've tried upsizing and done downsizing, eventually you will reach the level of rightsizing. Let's leave it there; I just wonder what Zim will bring next to top this.

Email ThisBlogThis!Share to TwitterShare to FacebookShare to Pinterest
Etiketter: workboats