It's not from the Fizz Cup itself, but it is from a recent graded Fizz Race. Bea gave me the facts, the graphics and the question earlier this sunday. I will leave it open for a few days, then add my response. 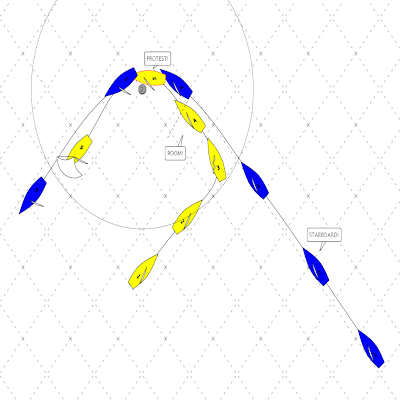 Facts:
In position 2: Yellow enters the zone on a port tack. Blue, still outside the zone,  hails "Starboard".

In position 3: Yellow tacks in the zone onto Blue lee bow (Blue not in the zone yet). Yellow passes head to wind, then fetch the mark on a stb tack. Blue has not to change her course, and thanks to a higher speed, Blue comes overlapped windward ahead to Yellow (Position 3 to 4).

In position 4: Overlap, Yellow inside hails for mark room.

In position 5: Blue doesn't give mark room to Yellow, and rounds the mark. Yellow has to slow down to round behind Blue and protests.

Blue will argue with rule 13 and 18.3, stating that 18.2 can't apply because she was fetching the mark when Yellow tacked. (If two boats were approaching a mark on opposite tacks and one of them changes tack, and as a result is subject to rule 13 in the zone when the other is fetching the mark, rule 18.2 does not thereafter apply.)

Decision:
Judges will agree with Blue, and will dismiss Yellow protest arguing with 18.3.

Yellow appeals:
Yellow appeals, stating that this case is not a 18.3 case, that she fully respected 18.3 because she didn't cause Blue to sail above close-hauled to avoid her nor prevent Blue from passing the mark on the required side, and that Blue did not become overlapped inside her, but outside.

My decision would be to DSQ Blue for breaking rule 11. See comments for insights.
Indsendt af Noodle kl. 21:40