Just an ordinary day. Out testing one of those new boats; Never mind which one. It was smooth sailing until it  crashed on me, and I was left in the middle of nowhere. That's perfect for a bit of exploring, so I decided to swim ashore and have a look at the locals and their habits.
Right north of my crash "site", there was a fabulous villa with a magnificient view over the ocean. It looked very nice, - kinda "Provencal" to me, but I won't show pics of the house, since it was private. At the edge of the terrace, stairs led me down to a small pier, where I found a couple of boats and a chair. 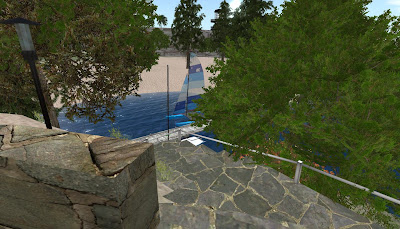 That pier was one of those places where one could sit for hours and just gaze. However, the really interesting stuff was - of course - the boats. Look what I found: Yes, it looks kinda familiar yet it is a little different.
I don't think I ever saw one of these boats actually sailing; I am told it was different, and at the time of its appearance it was supposedly a revolution in SL virtual sailing. Sure would be fun to try one. Does any one know what it is, and if it is available anywhere?

Update: As Orcs commented - this is a Fizz 1, the first edition of the now well known Flying Fizz 3;
Indsendt af Noodle kl. 12:36